1 Million Plays on Spotify – Here’s How Much I Earned

How much money do you earn from 1 million plays on Spotify?

But the bigger question is, how much do you continue to earn each month once you’ve reached six-figure-streaming?

And bigger still: Is it wiser to focus on other more lucrative revenue channels such as other streaming sites or download stores?

I’m going to help you answer these questions by showing you the following:

I’ll also reveal a much better strategy for earning money from your music than getting streams on Spotify.

How Much Does Spotify Pay?

Looking at those numbers, you’re probably a little disheartened to see that the revenue really isn’t impressive.

But 1 million streams is a hell of a lot of streams, particularly for those who work in more niche genres of music that don’t have the commercial reach of pop or Hip Hop.

Of course, if you have a commercial hit, you might be looking at 10 million streams in a week.

But for those in a small band or running a small label in a sub-genre of dance music, even getting to a thousand streams on a track is quite an achievement.

As an artist, you just want your music to reach as many people as possible. And for most, earning money from music is a bonus.

But you’re a small fish in an ever-growing ocean, in a digital world where the barrier for entry is low and releasing music is accessible for everyone.

While in many ways this is great – because it enables creativity and levels the playing field for smaller artists – it’s very difficult to find space amidst the noise.

The amount of music being released on a daily basis is phenomenal, and music is akin to churning out news articles, with artists releasing tracks on a weekly basis in a bid to stay relevant and keep their social media channels alive.

This topic is a whole article in of itself, but in short, this climate only seeks to drive down the value of music.

Spotify has to balance advertising revenue and the amount of people willing to pay for a subscription against the number of artists they have to pay per stream. 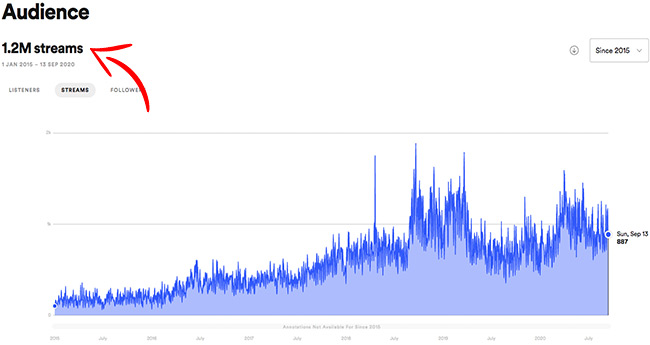 The album actually has 1.2 million streams.

But as you will note from the screenshot, this wasn’t done in one week or one year; this has accumulated since late 2015.

It is just one album release, though, not multiple releases. I’ve not released anything under this artist name on Spotify since.

There aren’t many people who’d be willing to share their dashboard with you like this, but I’m really interested in opening people’s eyes to the numbers and what they translate to in the real world.

Using my numbers, you’ll be able to dig down on other artists and work out what kind of numbers they’re hitting.

You’ll also be able to make better informed decisions on where to spend your time promoting your music. 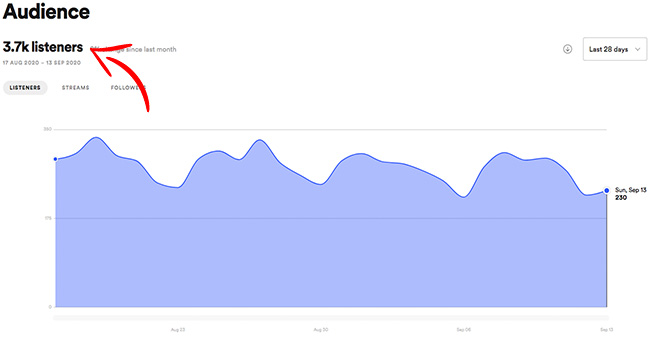 Again, you are probably disheartened to see that achieving 1.2 million streams will earn you just $4,800, and then a subsequent $217 per month.

But don’t get too down just yet.

This is passive income!  I haven’t done anything to earn this income since I released this album.

And if I wasn’t working on other projects and putting my energy elsewhere, I could have released more and increased this passive income.

Also, this is just one streaming service.

There’s Apple, and Tidal too. I will cover revenue from those in different posts.

And you can sell your music through download services too, where you’ll earn a far more handsome return.

Indeed, when you add all of these services together, it’s a nice little earner each month.

How Many Followers Did 1M Streams Get Me?

Followers on Spotify are important. When you release a new track, these are people who will be notified of that release.

Your content will show up their Home/Browse windows, trigger user notification/alerts, and influence other algorithms (e.g., radio stations, Release Radar) that ultimately promote your music.

So how many followers did I earn for my 1.2 million streams? 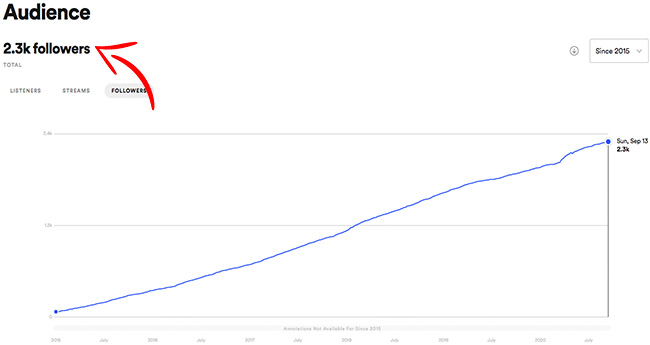 Now, you’re right in thinking that this is very low considering the amount of streams I’ve had.

But also consider that I haven’t had any sort of release schedule for five years, so I have done nothing to engage this audience or grow it.

The good news is that if I release a new track, I can immediately get it out there to 2,300 people. That’s a great audience base to have for a release.

When you consider that there aren’t many artists who could sell 2,300 tickets to have people come and listen to a live gig, it’s a good platform to launch a release from.

But still, the question remains: why haven’t I got more followers from 1.2 million streams?

The answer is in the next section.

Why Playlists Are the Key to Organic Growth

The fact of the matter is that this album is somewhat of an anomaly.

I did not pitch this to any playlists and did zero marketing.

Luckily it has been picked up by playlists over the last few years and this has resulted in a snowball effect of listeners.

I didn’t have any sort of launch strategy, and have never been active enough on social media to have a following to promote to.

What I did do, incidentally, was create something that clearly had broad appeal.

Over the last five years, the album’s tracks have ben picked up by 7,700 playlists.

The screenshot below from my Spotify dashboard shows the figure. 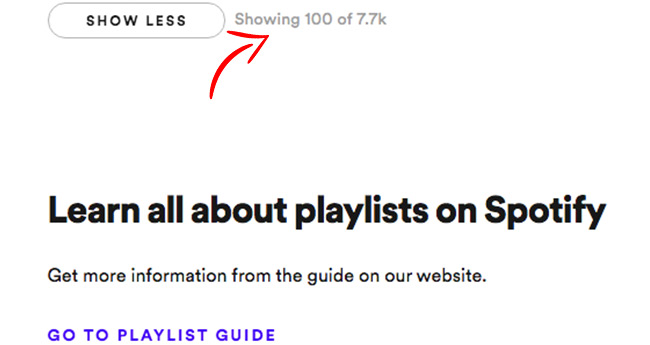 Playlists are key to achieving consistent streaming numbers each month, and achieving a passive income from your music.

It’s very difficult to get on the big playlists that matter. That said, you only need a couple of good ones for the track to take traction and get picked up by other playlists.

This is why signing your music to a major label or prominent independent label is so attractive.

There are certain labels that have a lot more clout than others when it comes to getting their artists onto Spotify playlists.

I’ve done a lot of research in this area and it quickly becomes obvious that no matter what material certain labels put out, they always seem to get on the big Spotify playlists in their genre.

This is obviously very frustrating for independent artists releasing by themselves, who, no matter how good their track is, rarely get a playlist spot.

This is because there are only so many spaces on a playlist, and as with everything in the commercial world of influence and money, those with the schmoozing power are most likely to fill those spots.

Labels know exactly what playlists they need to get on and what numbers they can expect in return if they do.

This data dictates how much they will be willing to sign a track/artist for, because they know the approximate return in advance.

Anyway,  let’s leave this conversation for another time.

Disappointed with Spotify? Here’s What to Do Instead

I remember the days when I was selling vinyl to a distributor and getting a return of £3 a record.

At that rate I’d only need to sell 1,000 records to make more than I’d make with a million streams on Spotify.

If you told your mom that you’d had 100,000 streams on Spotify, she’d be popping open the champagne thinking you had become a star.

And that’s because not even 15 years ago, 100,000 sales of a single or album would have made you a lot of money – depending on your label deal, of course.

But it certainly would have opened the door to a lot more opportunity and cash.

Rather than being disappointed with the way things are now, there’s a huge lesson that we can learn from this data.

Spotify is a great place to be discovered, and it’s certainly worth releasing on there and building up your profile.

Don’t get me wrong, there are artists making a fortune on there, but most people will struggle to get a thousand plays on a track. 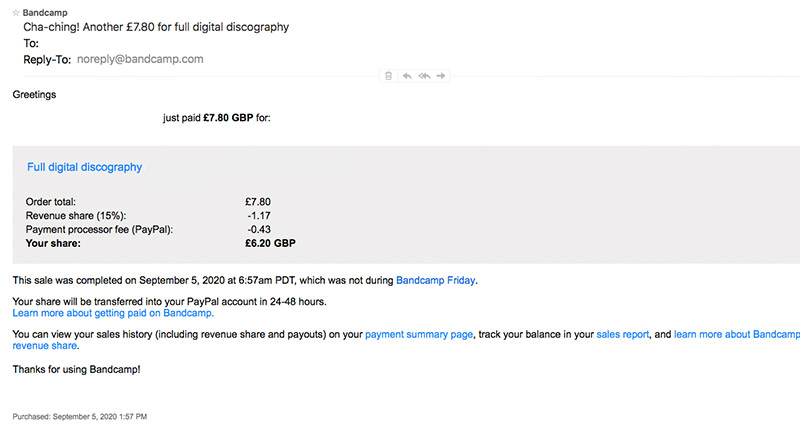 What if those 1,000 people, or even 500 people, who stream your track, paid for a download, or bought a vinyl, CD or even a USB stick release?

See the screenshot above of one of my recent Bandcamp sales. It would take around 2k Spotify streams to earn that £7.80 (6.20 after fees).

If you’re working in a fairly niche sub-genre of music where you are unlikely to achieve millions of streams on streaming platforms, then you need a different strategy.

Build a fanbase and give your fans personal value.

You don’t need a massive fan base to make money from your music, and not everyone’s model is suited to streaming platforms.

Don’t get caught up in streaming platform numbers; because they will probably depress you and affect your creativity.

When I say to my friends I’ve had well over a million streams on Spotify, they’re waiting for me to roll up in a Porsche!

The numbers sound big, but in reality they are pretty small compared to those who are really making money –  the big commercial artists.

And even the big commercial artists are making most of their money from other revenue streams such as merchandise, gigs, advertising sponsors, etc.

It could be that for your type of music and personal brand, a particular social media channel combined with a Bandcamp account will be far more lucrative than Spotify.

You could sell downloads of your music on Bandcamp for $2, and you’d only need to sell 200 downloads to equal the revenue you’d get from 100,000 Spotify plays.

It’s all food for thought.

If you have any questions about my Spotify numbers or want any advice, feel free to ask.

What to Do Next…

Have a listen to my latest track on Spotify, and follow me there for more music.

Hit me up and let me know what you think; either by email or on one of my socials.